Why is Kim Jong-il’s birthday bad for Korean plastic surgeons
and good for Chinese rice farms? 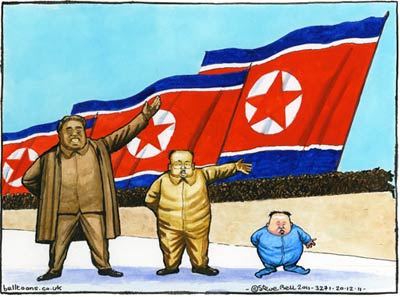 North Korea suffers massive food shortages and for political reasons has habitually given its people slightly larger food rations in advance of funerals and birthdays of its leaders . North Korea got through more than usual of its reserves of food last year when Kim Jong-il died and Kim Jong-un was set as new leader. As a result, imports of rice and other food commodities rose sharply, mainly imported from China which provides up to 45% of the North’s food. It is widely known that Chinese food aid is channeled to the North Korean military as a matter of priority. Other than being the “great successor” Kim Jong-un is also Vice Chairman of the Commission for Military Affairs of the Central Committee of the Workers‘ Party of Korea, and as such fully functional in the military.

Around his deceased father’s birthday Kim Jong-un eats better thanks to China and the military, picks up weight, looks more like his late grandfather and needs less surgery.

Things in the world are complex. Small things count. Up to the second decisions are crucial in international commerce and trading. With Gatfol patented algorithmic semantic technology, we can quickly work out why Chinese rice farmers are happy and North Korean plastic surgeons are downbeat.