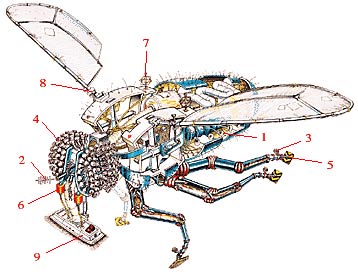 A housefly is the most accomplished aerodynamicist on earth.

It can make six turns a second, hover, hurtle and do somersaults with 90-degree reversals – all with a brain smaller than a sesame seed.

The secret is in the fly being able to process multiple inputs to simple output extremely quickly. Roughly two-thirds of a fly’s entire nervous system is devoted to processing large streams of incoming stimuli. If these multiple signals had to be routed to an approximate equal amount of output permutations, a fly would be bogged down with process management very quickly. Instead – the massive amounts of sensory data is boiled down to a few basic commands such as “left”, “right”, “up” etc.

In the same manner Gatfol processing is able to perform multiword semantic conversions to single words extremely quickly. But – in addition to the fly – it can do the reverse (single to multiple) equally fast. This enables Gatfol to pick up core concepts in large datasets and like a fly – produce focused output to optimise operational input.